The team in red, blue and gold is ready for an exciting 2019 season ahead.

Launched in 2017, the BAHRAIN MERIDA Pro Cycling Team can look back at two solid seasons which had their fair share of ups but also the occasional down. Led by team captain Vincenzo Nibali, the debut season of 2017 was cramped with top-level results, crowned by the two Grand Tour podiums of Vincenzo at the Vuelta a España’s and the Giro d’Italia’s as well as key events like Vincenzo’s win in the Tour of Lombardia. But our team is more than just a support network for the ‘Shark of Messina’. A long list of individuals brings diversity and different strengths to the team and allow for the athletes in red, blue and gold to ride into the spotlight on many different occasions. Supported through our dedicated and passionate R&D team, headed up by Head of Product, Jürgen Falke, the BAHRAIN MERIDA Pro Cycling Team is equipped with some of the most advanced technology and material in today’s world of road cycling.

Following in the footsteps of a hugely successful debut season was always a challenge for the athletes in red, blue and gold but once again the team impressed with a long list of achievements but also saw some extreme setbacks.

In particular, Sonny Colbrelli, Matej Mohoric, Vincenzo Nibali, Giovanni Visconti and Grega Bole showed some strong results in 2018. Amongst other key performances, Sonny Colbrelli managed to secure the overall victory in the Dubai Tour and Matej Mohoric won the Tour of Germany as well as the Binck Bank Tour. Giovanni Visconti showed impressive form at the Tour of Austria while Grega Bole managed to win two stages at the Tour of Japan. The season of team captain Vincenzo Nibali started off with an impressive victory at the infamous Milan Sanremo which showed promising form for the Tour de France later in the summer. However, his and the team’s ambitions would come to a sudden hold in the later part of the Tour. Vincenzo Nibali crashed heavily in the final stages of the Alpe D’Huez stage of the Tour and suffered a fractured vertebral, which ended his ambitions for the overall victory and also put him back in his preparation for the remaining season.

Luckily Vincenzo’s recovery has gone well, and he has shown promising form in the later part of the 2018 season, setting the tone for an ambitious year ahead for the team in red, blue and gold. 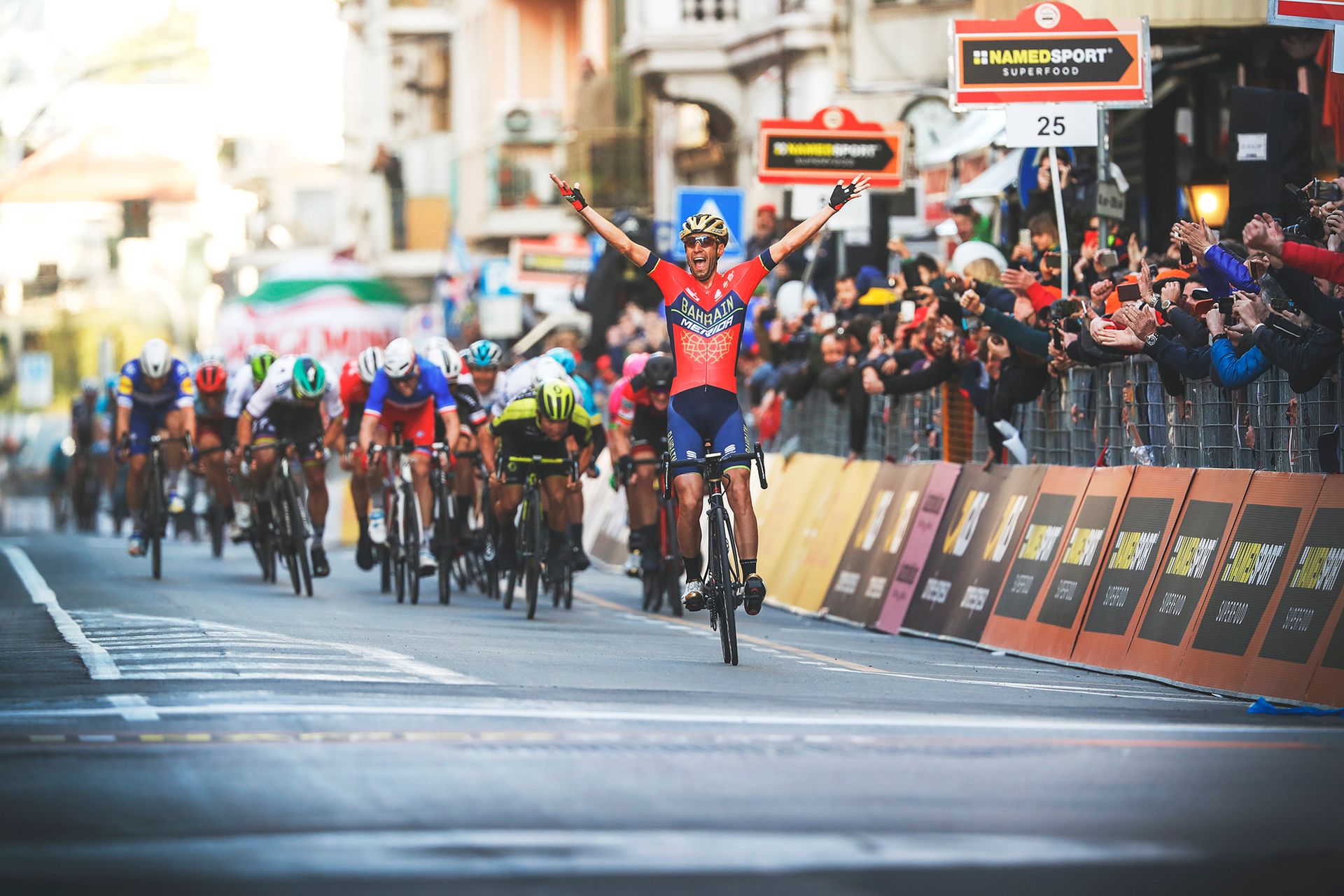 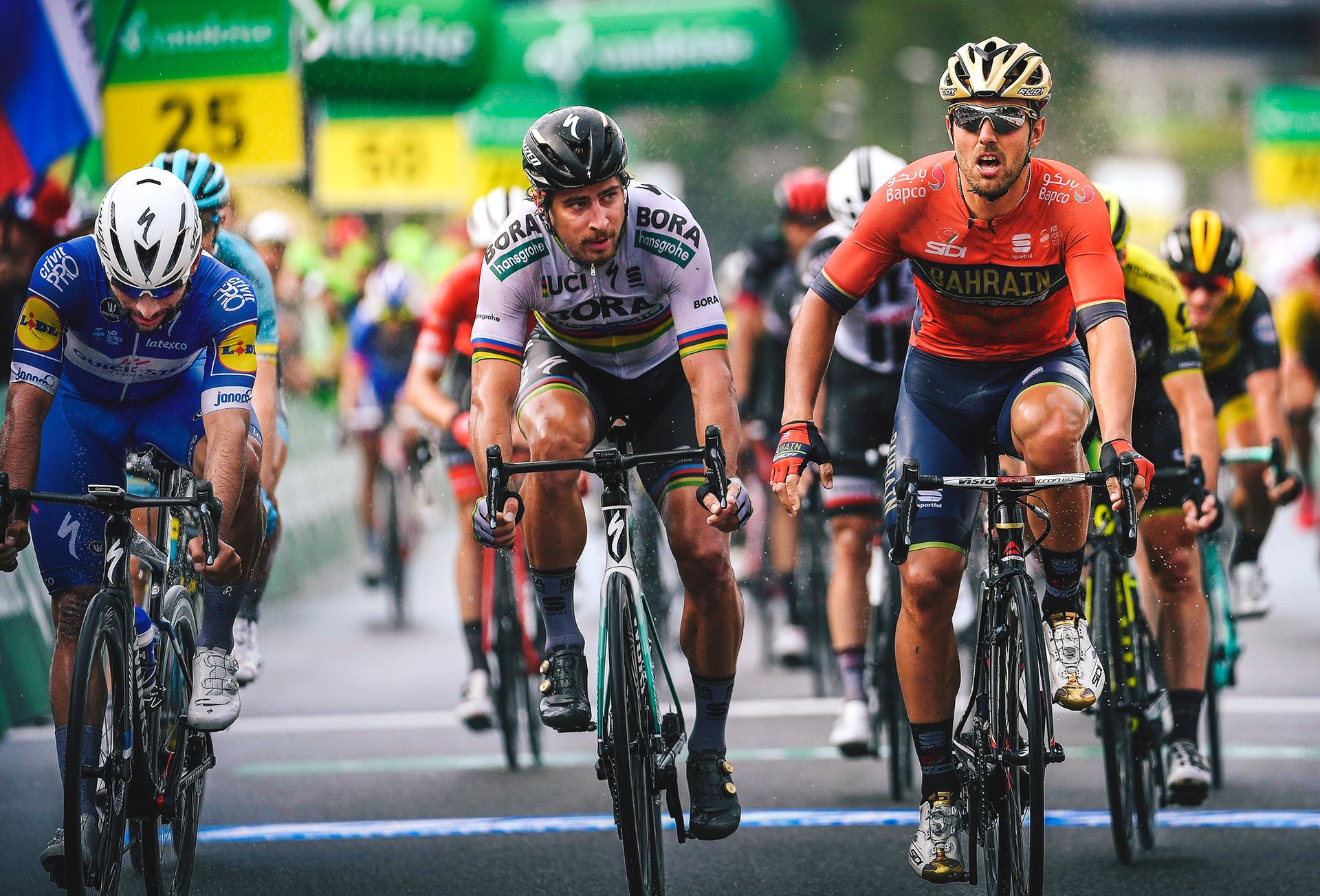 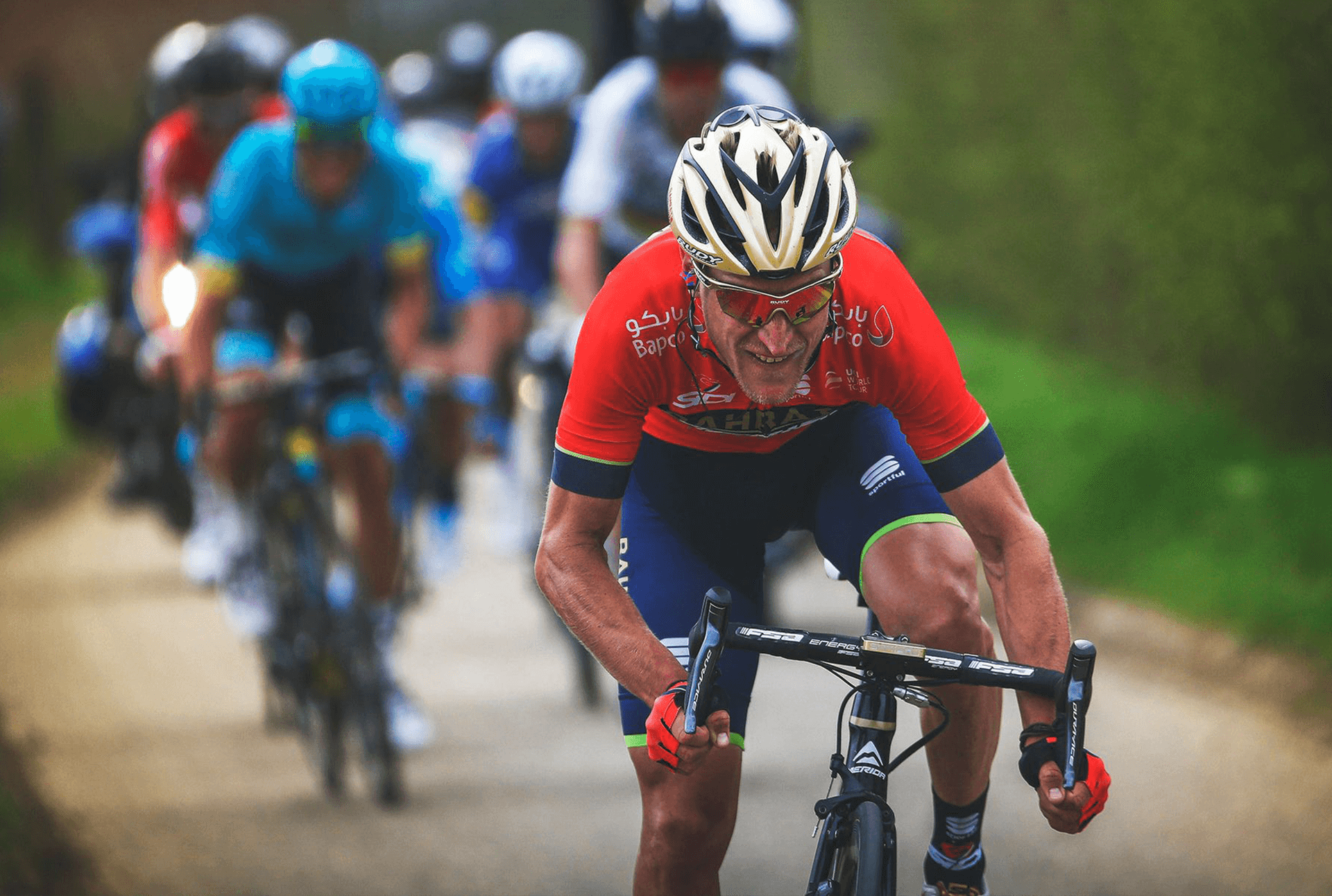 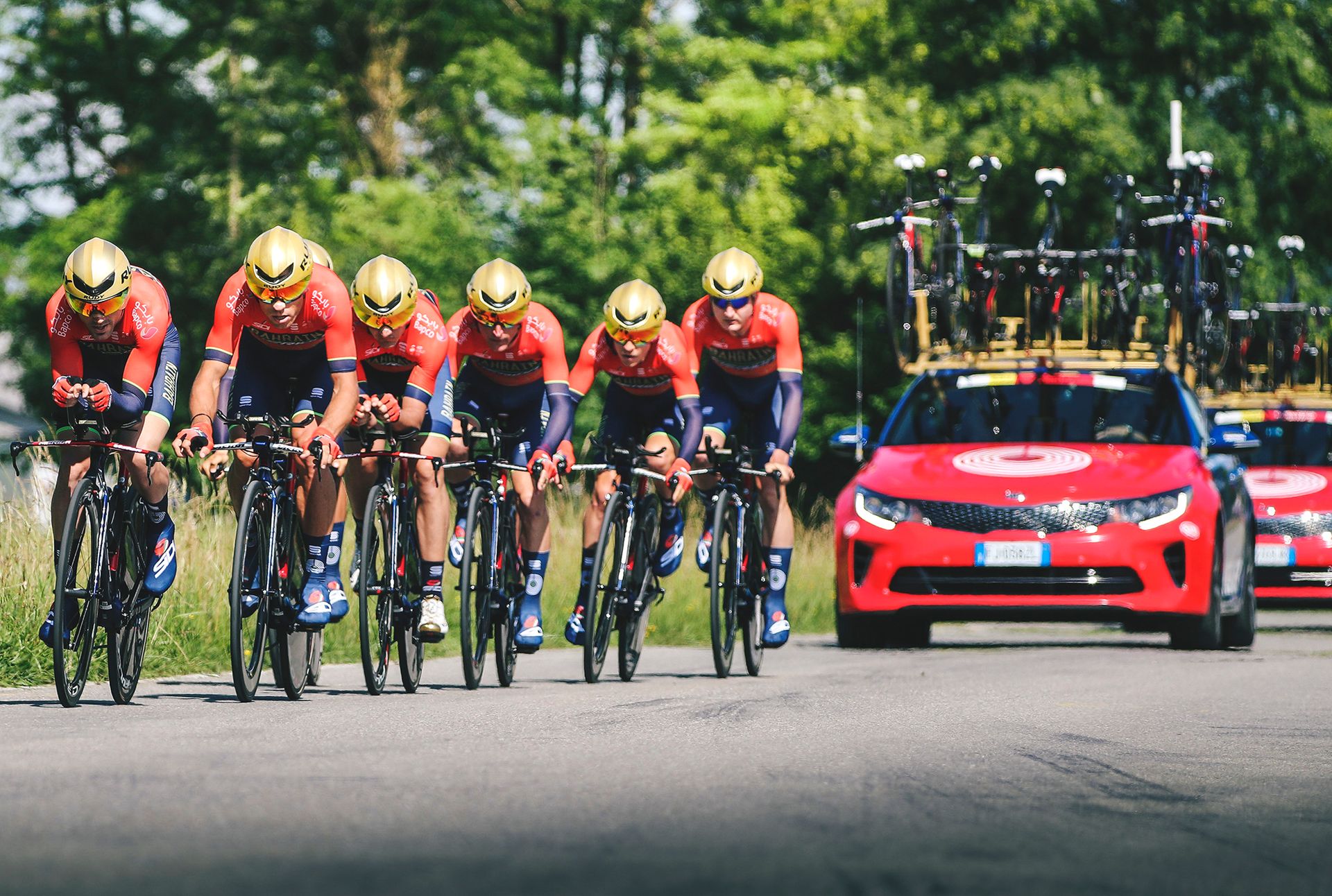 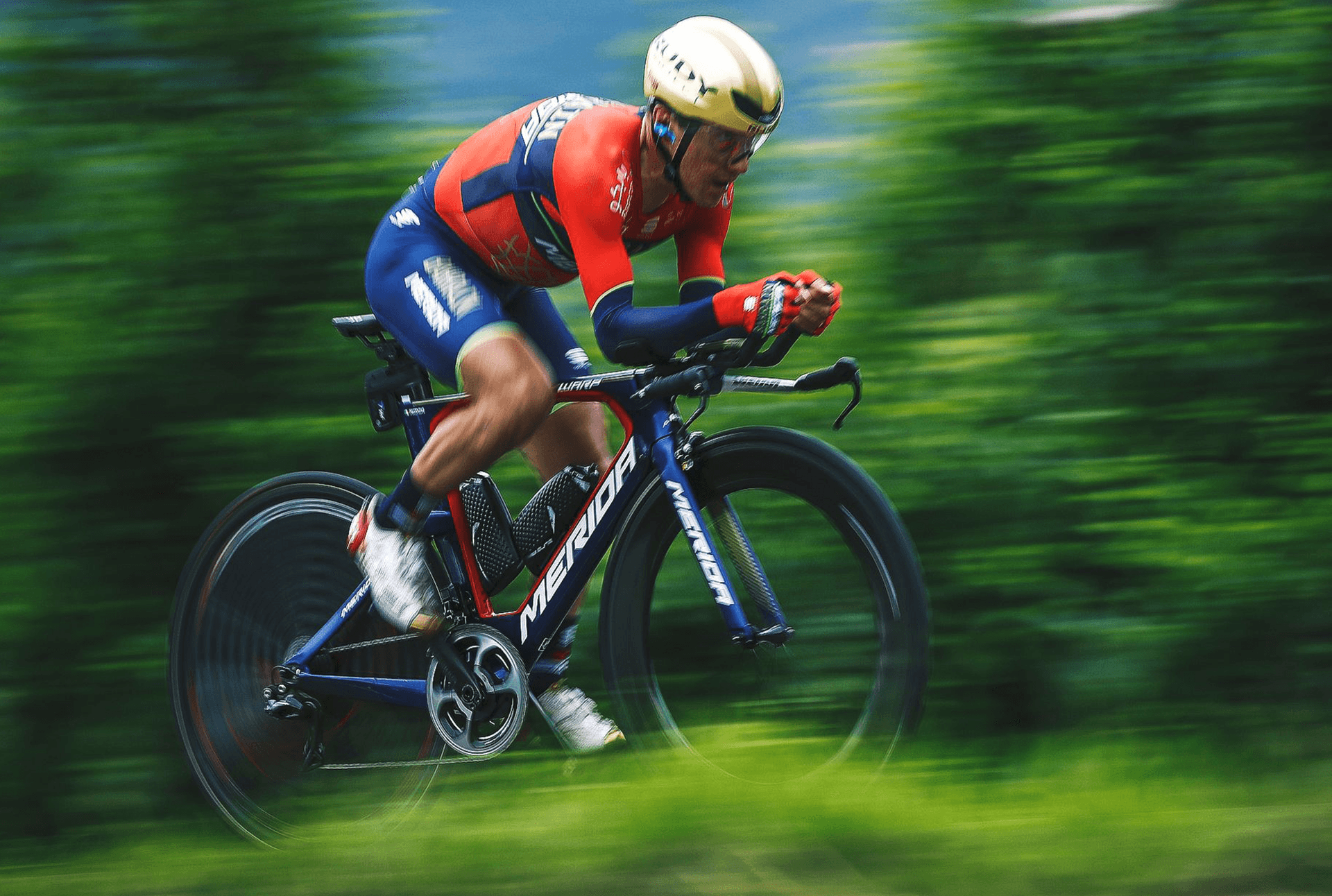 The BAHRAIN MERIDA Pro Cycling Team continues to be equipped with the perfect array of MERIDA bikes for the upcoming 2019 season – providing the ideal machine for every stage and every riding style.

On top of that, the team has once again chosen the perfect group of partners to equip the bikes with the best components available.

Time trial is a game of marginal differences and marginal gains. Discover how our new TIME WARP TT has become one of the fastest bikes on today’s TT circuit.

Time trial is a game of marginal differences and marginal gains. Discover how our new TIME WARP TT has become one of the fastest bikes on today’s TT circuit.

The team bikes of the BAHRAIN MERIDA Pro Cycling Team will be equipped with the latest Shimano Dura-Ace Di2 groupsets.

To give the riders detailed information about their performance, market leader SRM will be supplying their latest generation of power-cranks and PC-8 bike-computers. The SRM hollow carbon crank-arms are extremely stiff, offering unparalleled power-transfer and helping to drop the system weight below a standard Dura-Ace crank without power-system!

With regards to wheels, the BAHRAIN MERIDA Pro Cycling Team trusts the latest generation of FULCRUM’s superb SPEED wheel series, which were further improved in terms of rim-shape and carbon structure. The SPEED 40T wheels are the ultimate all-rounder, with a weight of less than 1,25kg per set and a perfect balance of low weight, high stiffness and suitable aerodynamic. Sprinters and breakaway racers will focus on the SPEED 55T with a more deep-section rim-profile, offering an improved aero-performance and slightly higher stiffness at full-gas sprinting, while steering might get a bit more demanding during heavy crosswinds. Both types of FULCRUM wheels are available in rim and disc-brake version and will be put into action depending on the terrain. All wheels spin on low resistance ‘CULT’ ceramic bearings.

FSA and Vision will supply the cockpits and seat-posts. After an intense testing period, the majority of the team-roster have decided to swap to the one-piece Vision METRON stem/handlebar combos, which offers superior aerodynamic performance and improve stiffness during sprints. The team’s climbers will choose the FSA cockpits for their incredible weight and stiffness.

Saddles are supplied by PROLOGO – all with carbon rails and carbon shells and equipped with PROLOGO’s unique CPC anti-friction system; even the brand-new Dimension saddle will be provided, a shorter saddle that offers a higher level of comfort and improved aerodynamics.